"A lot of my work is about entering into dialogue with a particular city," Iranian artist Shaqayeq Arabi told artnet News in an email.

Although she has shown her work extensively in the Middle East and in Europe, this is her first solo-show in New York. Her exhibition Study of an Upturned Ziggurat is currently on view at the Department of Signs and Symbols in Brooklyn.

The space was originally a studio but its function has expanded in recent years. It has just enough room to squeeze in pieces for an intimate viewing. Co-founder and curator Mitra Khorasheh explained to artnet News in an email, "What we do here is not just 'selecting artworks', its more commissioning an artist to create something in situ and developing ideas and concepts together."

The large site-specific piece is made of abandoned picture frames and tree branches that Arabi found on nearby Brooklyn streets. The structure is lashed together with cloth and string, and light bulbs underneath cast shadows on nearby walls. The dimly lit room and the frames offer a skeletal shape of a tower, creating an immersive and meditative experience for viewers. Arabi said to artnet News in an email, "What interests me in site-specific work like this is the way in which it can engage all the senses."

Arabi started creating site-specific installations ten years ago when she was given access to a larger studio. In 2009 Arabi and her husband, architect Dariush Zandi, used found objects from the site of a burned down fireworks warehouse in Al Quoz, Dubai, using melted safety pins and bits of the roof for pieces that they featured in their show Scraps. Her husband's architectural background helped her expand her point of view.

Arabi told artnet News in an email, "He brings in that element of really looking at space." The artist is following in the footsteps of assemblage artists, but she isn't questioning the banality of the objects; instead, she is gesturing toward the organic qualities in natural and man-made objects and environments.
In a smaller room in the back there are other works to consider—six collages and four assemblages that are extensions of the upturned Ziggurat. The thin paper contrasts with the heavy branches used in the collage much like the wooden frames and branches contrasts with the shadows to create an anchored, yet open and inviting, space.

"What interests me the most about her work is the way in which she works; there is this organic process to her practice where you never know what Shaqayeq will produce next." Khorasheh told artnet News. "For me, its this mystery of never knowing what to expect that attracts me to her work." 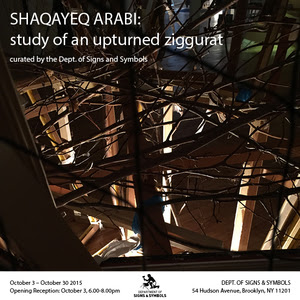 
Arabi’s site-specific installation is emblematic of her work and her use of found natural and industrial objects. The structure consists of picture frames of various sizes that the artist collected on her first visit to the Dept. of Signs and Symbols. The artist builds upon the frames with tree branches, twigs and nets, assembling and tying the materials together using rope and cloth. The industrial and natural objects, both once essential to the existence of human life, maintain a past narrative while constructing a new continuum. The reference to an ancient ziggurat alludes to the story of the Tower of Bable, mythologized as a rectangular stepped tower. This allusion to mythical history weaves a line between architecture and sculpture, and their monumental essence. Yet the composition grounds the structure in the every day. The ephemerality and delicacy of nature destabilizes the installation creating a contrast to the imagery of the tall, strong, stone tower.

Describing the organic and intuitive nature of her process, Arabi states; “I enjoy journeys with no determined destination. I leave the idea to evolve to find its own shape and form, and the process to refine the concept and I’m part of the evolution.” Her work is specific to the place and site of creation, with each sculpture or installation held together using only the found objects with no additional adhesive holding them in place. In her process of accumulating and assembling the work, Arabi traces her reminiscences, creating a tangible reality out of her more personal sensations and associations. She and the work as a larger entity inform one another; the personal and the material interlock and are created simultaneously. The structure itself, built in situ, casts shadows on the walls, playing and interacting with its surroundings, presenting an interplay between Arabi’s personal past, her memories and findings, and the actuality of the creation of the structure.

Shaqayeq Arabi is a painter, sculptor and installation artist living between Tehran, Dubai and New York City. Starting to paint and practice calligraphy in the early 1990s, she received her Masters in graphic design from Al-Zahra University Tehran, a BAF from University of Valencinnes, France and a MAF from Sorbonne University, Paris. Arabi’s works are fundamentally abstract yet evoke a range of associations. For her, art is a form of spontaneous personal expression, as well as an exploration of her past and present memory. She finds her point of departure in image, sound and smell, as well as the sensitivity of the surrounding environment. Arabi has had exhibitions in the Middle East and Europe.

The Dept. of Signs and Symbols is a laboratory for innovative experimentation and expression. The curatorial program serves to nourish emerging artists, to disinhibit the ordinary and to incite the unexpected. Focused on interaction and visible process, the project space allows for critical exposure for the artists, as well as a fostering of curatorial voices and collaboration. Through this crossing of art and life, a constellation of people, ideas, backgrounds, intentions and dreams form. Open to the public and based within the distinctive neighborhood of Vinegar Hill, The Dept. of Signs and Symbols opened its door to the public in March 2015, with its inaugural exhibition presenting the work of Brooklyn-based artist Daniel Horowitz.

Via artnet and Wall Street International

Dr Aida Foroutan
Aida Foroutan was born in Tehran in 1976, trained as a painter and graduated with a BSc in Industrial Design from the Alzahra University of Tehran. She relocated to Sweden in 2000, where she worked in theatre and museum curation and exhibited her paintings in Sweden and Germany. A book of her poetry, Forbidden Peace, was published in Stockholm in 2003. She moved to the UK in 2007 to do her Masters degree in Theatre Studies at the University of Manchester, then did a PhD there (2008-12) in Art History, entitled ‘The Reception of Surrealism in Iranian Art and Literature’. She has published a number of scholarly articles for peer-reviewed academic journals and one for a Festschrift. She is now revising her thesis for publication and is also working on the subject of censorship in modern art. In May 2018 she convened a very successful international conference on Modern Iranian art and architecture in the shadow of the classical Persian past at the John Rylands Library Deansgate.

I have never ever dreaded death,
though its hands have always been more fragile
than banality.

My fear, however,
was of dying in a land

where grave diggers’ wages
are higher
than the price of human freedom.

If only freedom could sing a song;
small, small,
even smaller... than the throat of a bird...

...It's only Truth that is liberating. 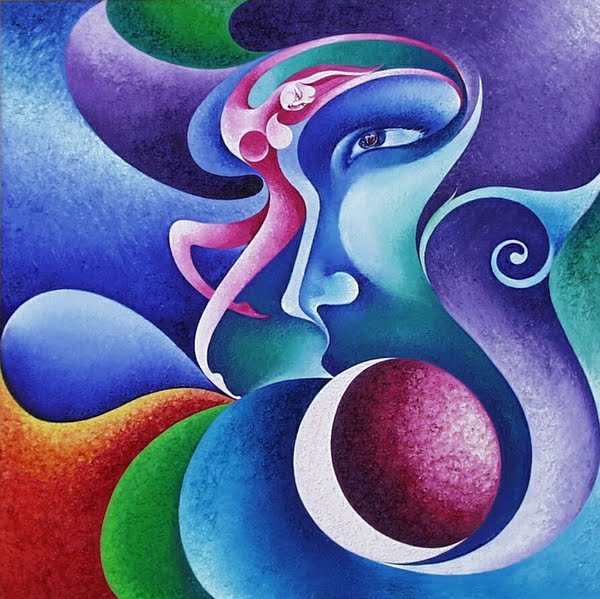 Representation of Women in Iranian Art